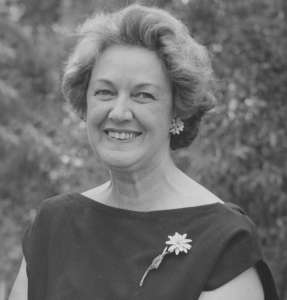 The $5,000 Sylvia Jones Prize for Women Artists is proudly supported by The Clem Jones Foundation

Sylvia Jones (1909-1999) performed many different roles and made a significant contribution to the City of Brisbane as Lady Mayoress during her husband Clem’s record term as Lord Mayor from 1961 to 1975.

Noted for modernising the city — especially its road, transport, water, sewerage, and community and sporting infrastructure — the administration led by Clem Jones also helped to develop and expand Brisbane’s cultural life with Sylvia as Lady Mayoress playing an active and leading role.

Clem and Sylvia Jones both took a personal interest in Brisbane’s cultural life and development.

As Lady Mayoress, Sylvia helped establish the Brisbane City Council’s historical and arts collection, and encouraged and lent her support to Brisbane artists and their exhibitions.

Sylvia Jones had a deserved reputation as a gracious and approachable woman who, as Lady Mayoress, entertained with diplomacy and style, and was a notable ambassador for the City of Brisbane wherever she went.