All brought together to celebrate the character of the city and those who make it special, at the Opening Night Awards Presentation of the inaugural Brisbane Portrait Prize.

The 450 strong crowd, including most of the artists and sitters, held its collective breath as Chief Judge, QAGOMA Director, Chris Saines, announced the winners.

There was silence also, as he read the justifications for his selection, and then joy and admiration, as the crowd parted as the artists and sitters made their way to the stage, to collect the prize from the supporting sponsors, amid increasing applause and catcalls from the audience.

It was one of those nights. Big name artists, like Michael Zavros, Pat Hoffie, Keith Burt and Beth Mitchell were sharing stories talking with artists just starting out.

Celebrity sitters, like Jackie Macdonald, Kevin Walters, Matt Okine and Amy Sheppard were rubbing shoulders with art dealers, sponsors, supporters, and members of the public with an interest in art.

Saines wrote of the winning portrait:
“His exquisitely alive portrait of Jordan Azcune will likely come as a surprise to many, but it shouldn’t, because Brown is a consummate modern painter. Portrait of a Young Artist, Jordan Azcune (something of a play on James Joyce’s ‘A Portrait of the Artist as a Young Man’) is a dazzling, highly resolved image that speaks unequivocally to the viewer.

I awarded this painting the inaugural Lord Mayor’s Prize because it was the most insistent work in an enormously diverse field.”

Brown, 70, is an artist based in outer Brisbane, who’s works are held in all major galleries, and who is mostly known for his abstract work, and his detailed rendering of Russian orthodox ikons. The portrait he entered in the BPP is the first he has painted in 40 years.

“I guess I’ll be more known for portraits now,” he said later. “Perhaps I’ll have to paint some more.”

The $10,000 Digital Portraiture Award, supported by Accenture, was won by Marian Drew, for her portrait of Brisbane fashion icon, Lydia Pearson. Saines wrote of this work:

“Marian Drew’s searching portrait of fashion designer Lydia Pearson has all the hallmarks of a still life but is patently a portrait, and an accomplished one at that. It’s one of the most refined examples in the Prize of the way in which an artist can remain true to their own visual language while simultaneously searching for an essential truth about their subject. All too often, a portrait can be drawn in a signature style in which the sitter can seem secondary to the artistic project. Not here, where the pictorial structure and devices of Drew’s image are an adroit match for what Pearson herself brings to the creative cutting table.”

“Bronwyn Hill’s portrait of singer-songwriter Robbie Miller gets right to the heart of its subject – a musician content to write and perform in isolation, until the ‘bedroom to broadcast’ trajectory of arare nascent talent propelled him into view. Rather than depicting Miller in performative mode, Hill strikes a more solitary and reflective note, at home and away from the public gaze. What’s unusual about this portrait is that so much of its figuration is comprised not of its human subject but of the things that surround and enfold him. The crumpled cushions and throws rise up in the foreground like a shield of domestic intimacy on standby, while the more formal architectural arrangement of the apartment helps to hold the painting’s spatial organisation.”

The categories in the Brisbane Portrait Prize allowed for extensive innovation and experimentation. This was particularly true of the digital category, which was limited to any digital work, not video, that could be printed and hung. These included works entirely digitally constructed, and some which were digitally altered photographs.

The winning piece was a portrait of Brisbane singer, songwriter, Amy Sheppard, who was, according to Saines, caught “in a moment of sublime metamorphosis,” by artist Beth Mitchell. Mitchell is a young Brisbane artist whose practice involves taking photos underwater. Saines writes:

“Hellenistic sculpture – think of the Parthenon Marbles – was celebrated for its ability to create ‘wet look’ drapery, while Mitchell has managed it effortlessly, transforming Sheppard into an ascendant goddess in the process. A brilliant young star and a celebrated role model on her way up! But this is a far from effortless portrait, hard won after hours spent in the goose bump inducing deep end. What results is an otherworldly portrait of a singer who is, paradoxically, admired for being so grounded.” 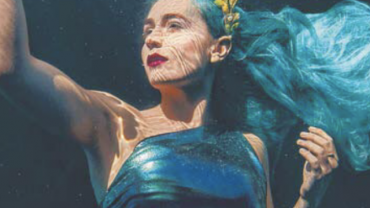 20 Apr, 2019
Published in The Courier-Mail on Saturday April 20, 2019, this article by Phil Brown talks about the challenging yet beautiful work by Beth… 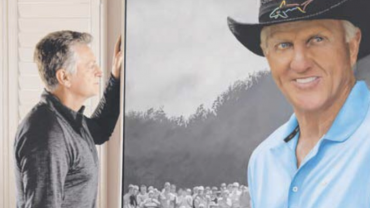 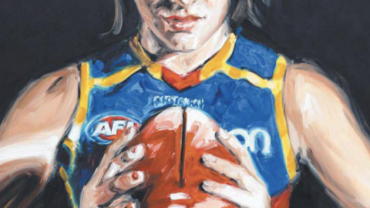 28 Sep, 2019
“From the city’s top sport stars and scribes to pianists, pop singers and public servants, the Brisbane Portrait Prize takes pride in its…